Cyberpunk will probably be filled with politics.

We all already seen the haircuts but how whats still unknown is just how much left propaganda is this game expected to have? I’m asking because normally you can count on CDPR not including that cringy stuff but the latest videos has displaid a worrying amount of candy colorued haircuts, sjw style characters and people looking neither like men or females.

Sure there are also some sexy characters but almost all have that Fortnite look to them and I was expecting this game to stay dark and depressive in atmosphere for immersion. This leads me to wonder, how heavy is the s jw influence here? Has CDPR restrained american imfluence and cancer culture or have they been allowed to take a hold of the art direction?

— Clouddffvii posting on the GameFAQs Playstation 4 board. 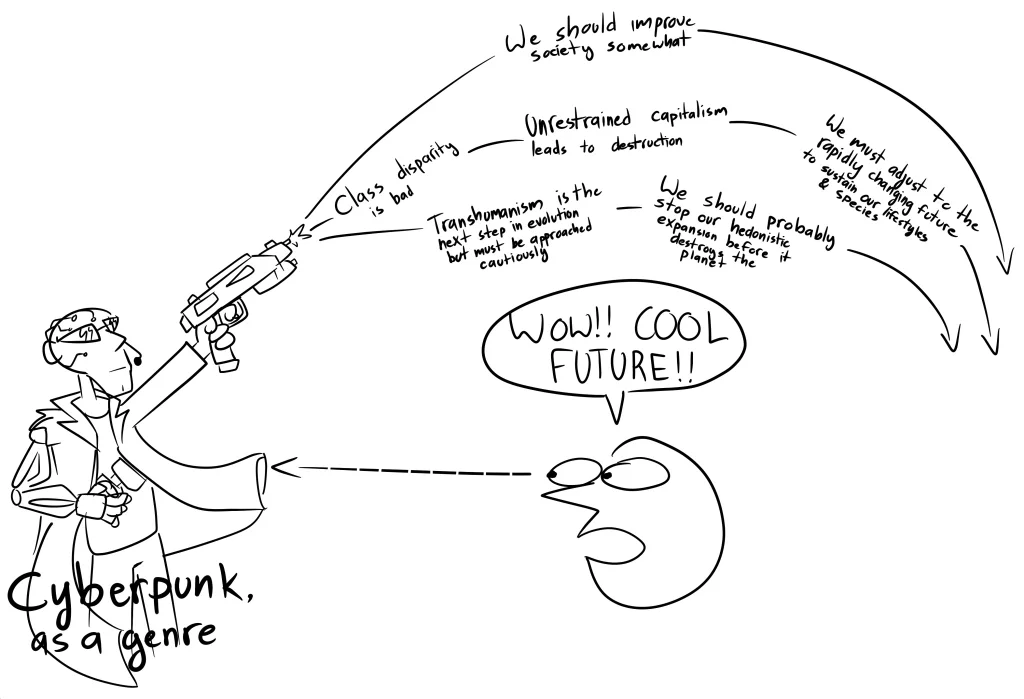 Cloud begins by supporting their original premise, citing evidence of cringe “left propaganda” in recent promotional videos. That evidence is limited to how the characters look. It’s not that any of the characters said trans rights, Medicare For All, or that Black Lives Matter, but they look like they might. 😒

Cloud concedes that they do consider some of the characters “sexy”, but in other characters sees the decidely unsexy influence of sjws, America, and cancer culture [sic] in the game’s art direction. Again, it’s not that clear messages in favor of social justice or cancel culture - with all its overreachs - are presented, or that these surface level details in any meaningful way contribute to American cultural hegemony (although the creators of the original role-playing game are, in fact, American), but still.. Cloud has been lead to wonder.

Do the aesthetics of Cyberpunk 2077 represent a needlessly colorful departure from traditions of the cyberpunk genre?

Except for the long pink hair, she looked more like a folkie than a thrasher, but Sam wasn’t feeling choosy. Synners — Pat Cadigan

He was an aging child with green hair and claimed his name was Earl O’Jelly. ‘Nobody knows more. Nobody and no body. If you get what I say here.’ Tea From An Empty Cup — Pat Cadigan

“What about the blue hair?” \ “We might have to finesse that a little, but the gist of it is that the people who signed up for this rebellion were told to wear gaudy clothes and adornments as a badge, so that they would know who was in on the conspiracy.” Reamde — Neal Stephenson

I mean have you ever seen a punk before? No matter how alive their mohawks are I promise you they’re still dead on the inside.

Can we reasonably expect Cyberpunk 2077 to be filled with leftist politics?

Ultimately candy-colored hair is not the damning evidence Cloudd from Final Fantasy vii wants us to believe that it is. Will Cyberpunk 2077 be filled with politics? Yes. I cannot imagine any role-playing game, with its story rooted in any kind of competent world building, and with multiple factions and all their competing interests requiring players to choose sides, that was not political. The Witcher 3 was political. Even if I could image a theoretical apolitical role-playing game I wouldn’t want to, because that game would be fucking boring.

But the truth is that Cyberpunk 2077 is more likely to be an anarchocapitalist’s wet dream. Night City is a place where heavily armed cyborgs are allowed to defend their property by lethal force. CDPR developers have already stated in interviews that they do not intend their game as a political statement. It is therefore our responsibility to decide if a polluted, pay-to-win world governed almost exclusively by large corporations is a good one or not.

And because gamers have a well documented history of missing the point, I believe many of them will decide that yes, it is.